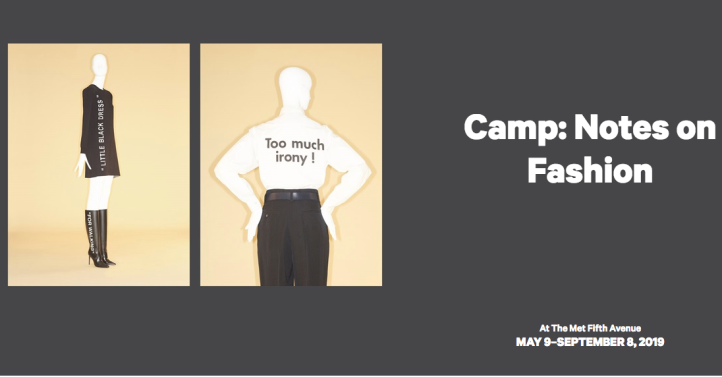 The Metropolitan Museum of Art has announced that The Costume Institute’s Spring 2019 exhibition will be Camp: Notes on Fashion, on view from May 9 through September 8, 2019 (preceded on May 6 by The Costume Institute Benefit). Presented in The Met Fifth Avenue’s Iris and B. Gerald Cantor Exhibition Hall, it will explore the origins of the camp aesthetic and how it has evolved from a place of marginality to become an important influence on mainstream culture. Susan Sontag’s 1964 essay Notes on ‘Camp’ provides the framework for the exhibition, which will examine how fashion designers have used their métier as a vehicle to engage with camp in a myriad of compelling, humorous, and sometimes incongruous ways.

“Camp’s disruptive nature and subversion of modern aesthetic values has often been trivialized, but this exhibition will reveal its profound influence on both high art and popular culture,” said Max Hollein, Director of The Met. “By tracing its evolution and highlighting its defining elements, the show will embody the ironic sensibilities of this audacious style, challenge conventional understandings of beauty and taste, and establish the critical role this important genre has played in the history of art and fashion.”

Camp: Notes on Fashion, made possible by Gucci with additional support by Condé Nast will celebrate the exhibitions opening, with The Costume Institute Benefit, also known as The Met Gala on Monday, May 6, 2019. The evening’s co-chairs will be Lady Gaga, Gucci’s creative director Alessandro Michele, Harry Styles, Serena Williams, and Anna Wintour. The event is The Costume Institute’s main source of annual funding for exhibitions, publications, acquisitions, and capital improvements.

“Fashion is the most overt and enduring conduit of the camp aesthetic,” said Andrew Bolton, Wendy Yu Curator in Charge of The Costume Institute. “Effectively illustrating Sontag’s Notes on ‘Camp,’ the exhibition will advance creative and critical dialogue about the ongoing and ever-evolving impact of camp on fashion.”