Louis Vuitton – The Icon And The Iconoclast Collection 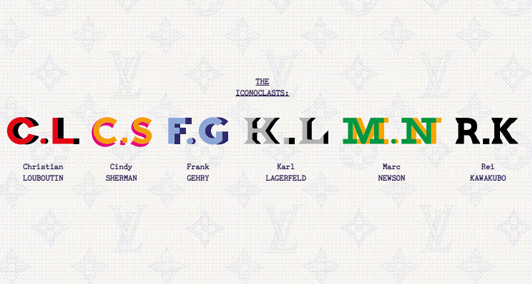 The six have been given carte blanche to create a personally inspired bag and/or a piece of luggage, using the iconic Monogram while keeping with the brand’s spirit of innovation, collaboration and daring.

“When we talked with Nicolas Ghesquière about the extraordinary talents we would like to approach we simply went to those who are among the best in their fields,” says Delphine Arnault, executive vice President of Louis Vuitton, who came up with the idea alongside Ghesquière, Vuitton’s new artistic director of women’s collections. “We were interested in people who work with their minds and their hands. I thought it was so interesting – and fun! – to have all of these different points of view on the Monogram. It is inspiring to see how they envision things, to see their perspectives. This is a group of geniuses.”

The monogram was created in 1896 by Georges Vuitton as a tribute to his late father Louis, who had died four years previously, and was considered revolutionary in its time.

The exclusive and limited edition collection will be available in select Louis Vuitton stores worldwide in mid- October. www.louisvuitton.com