Who Stole The Show?

The men’s S/S 2012 collections from the recent shows in Paris and Milan were stronger than ever this season. Here’s a look at a few standouts that stole the show. 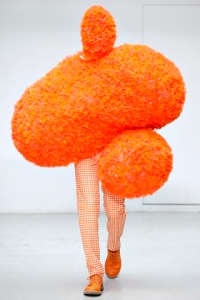 Walter Van Beirendonck continued to show his brilliance with color and prints with his Cloud #9 collection.  With his first exit Beirendonck clearly stated his intent by adding a modern approach to the 50’s pompadour wave, complete with comb wedged in hair and a washed makeup that seemed to drain through the models body and into his clothes. A sleeveless checked jacket mixed with an opposing print pant, was finish by zigzag print elbow length gloves and matching print shoes.  Beirendonck continued his parade of vivid color fused with strong patterns vs. prints and ended the collection with the models cocooned in abstract sculptural ballooned clouds out of tulle and origami style fold, from his collaboration with Austrian artist Erwin Wurn and his Wear Me Out exhibition currently at Antwerp’s Middelheim Museum though September 25. www.waltervanbeirendonck.com

Thom Browne understands theatric through fashion better than anyone. His collections, which typically resemble a couture presentation cloaked in a multi-layer of textures and prints, was clearly evident here by use of Laurel & Hardy themed suiting and coats, topped by fringed lamp shade hats, miniature bowler domes and striped sock garters. The collection was also brimmed with flapper style fringe under suits and coats and exaggerated pinstripes detail. www.thombrowne.com 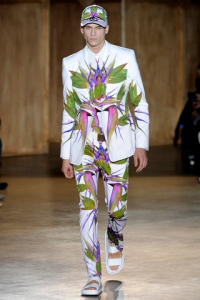 Givenchy found light at end of what’s typically a dark tunnel as Riccardo Tisci moved from his usual heavier themed presentations to a collection filled with modern sporty gladiator styled beachwear. Bird of paradise prints some emblazoned with crystals, covered white suits and muscle tees and while most silhouettes were tailored Tisci played with boxier styled sweaters, bombers and baseball jackets in military greenshown over knee length man skirts with Hermes sandals. www.givenchy.com 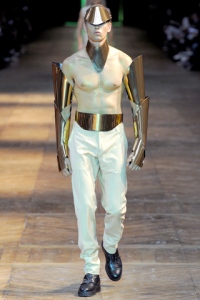 Mugler creative director Nicola Formichetti showed that he has a vivid imagination with his Brothers of Arcadia show, which started with a visual short presented by Formichetti and directed by Branislav Jankic, featuring Adonis like gods, that appeared to have been washed ashore by a morning wave scantily clad at play. The show continued its mythical theme as models paraded down the runway in ivory and acid washed tailored Greek God attire some complete with protective armor. www.mugler.com 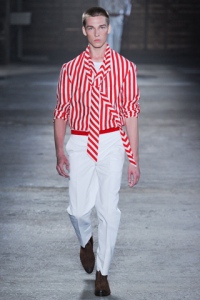 Alexander McQueen continuing her stride Sarah Burton whom by now has more than earned our respect as creative director at McQueen presented her English Rock collection filled with overt references to Mick and the gang. The thirty-four piece collection featured tailored hounds tooth and pinstripe suiting, striped sportswear in bold tones, doubled-breasted blazers, single-buttoned blazers with vests and tuxedo tails over lose fitting drawstrings trousers. www.alexandermcqueen.com 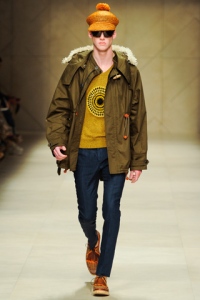 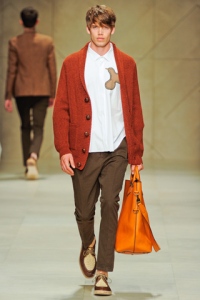 Burberry Prorsum under the helm of Christopher Bailey has become one of the most profitable brands of the 21st Century and Bailey didn’t miss a beat with his latest men’s collection inspired by the digitalization of modern culture. The collection filled with texture, color and bold prints was masterfully presented through the houses signature jackets, coats, and parkas, which found a new finish with raffia trim and crocheted collars.  Bailey also made a strong knitwear statement with cable knit cardigans, loser fitting shawl-neck pullovers and zigzag print sweaters. The collection was finished with skinny trousers, travel bags, woven raffia bobble caps and cork-soled woven suede moccasins.  www.burberry.com 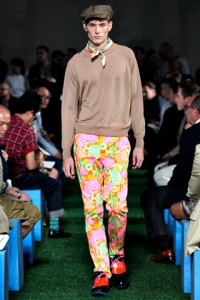 Prada Miuccia Prada found her latest menswear inspiration in the game of golf. Prada took the game that typically requires a more conservative approach to dress to a bolder and more colorful place with check prints and louder than life floral-print shirts and trousers.  The collection was filled with double-breasted and single-breasted tailored suits, woven and quilted jackets and western styled Eisenhower shirts. Printed silk scarfs, golf caps and clubs, rounded out the look. www.prada.com